Back to all posts

If you've mixed in the box with analog emulations of hardware units, you must have come accross, at some point, the emulation of an 1176 compressor or other FET compressor. While there isn't much to be added to the 1176 emulations already available out there, more could maybe be said about its close relative and much less emulated 1178.

"The 1178, released in 1980, is a stereo version of the legendary 1176, which is present in studios all over the world. The 1178 does not have an input transformer and the class-A circuitry present in the early versions of the 1176 compression circuit, which gives it less warmth, but more transparency and therefore more versatility, while keeping the legendary punch.

This versatility will enable you to use our 1178 as a character compressor on percussive elements (bass drum, snare drum), instruments such as guitar or bass, vocals (where it excels), busses (drums, guitars) or even on your master channel." 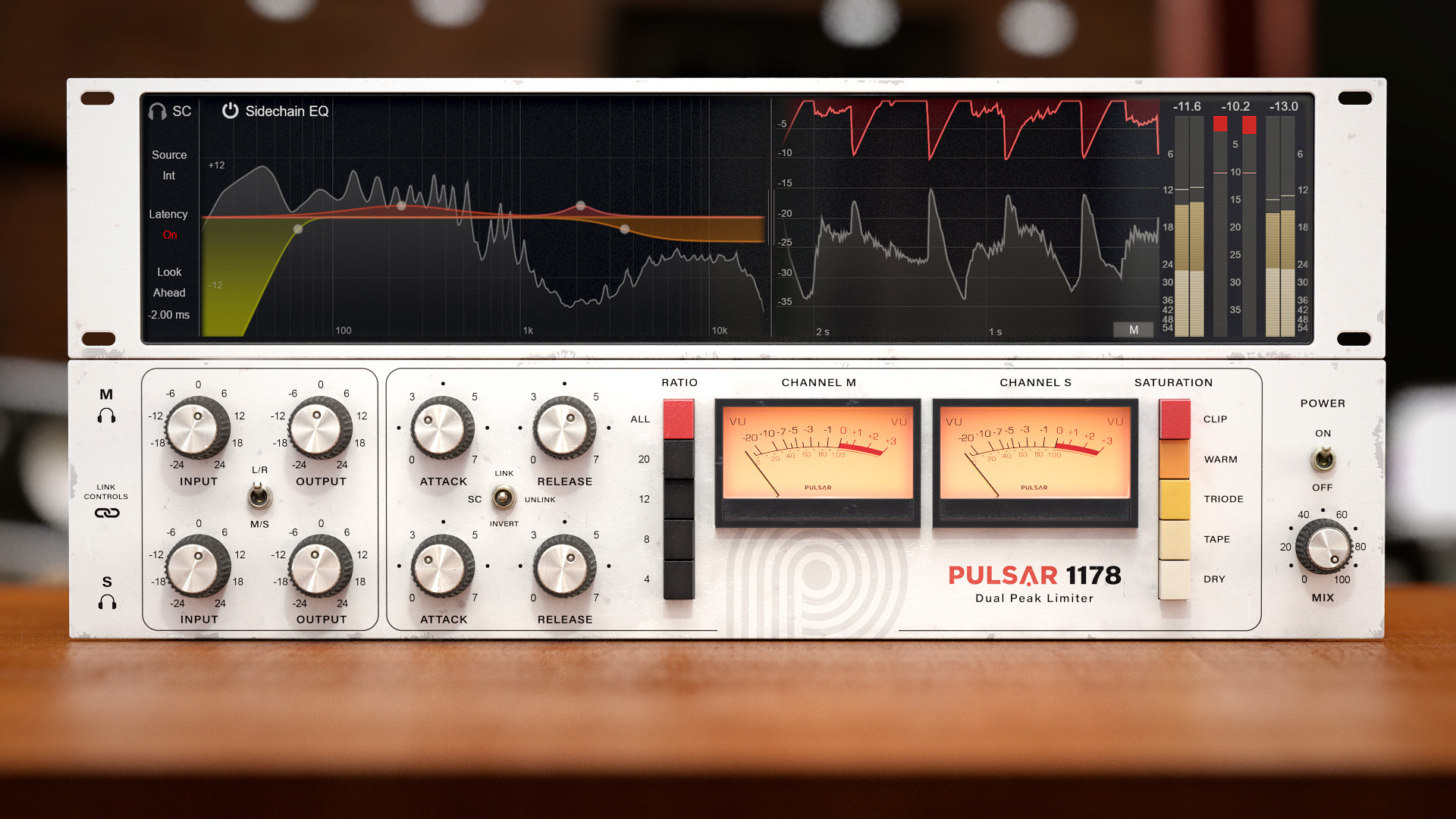 I've found that the compressor was easy to navigate, I don't personally mind having a 3D, vintage looking, interface and I've found this one (as the other Pulsar Audio plugins) to look particularly gorgeous. The metering on the top panel is pretty effective and clearly shows what's going on. The sidechain EQ's metering is also effective and modern-looking, allowing you to hone-in on the parts of the spectrum that you want to compress more (or less).

While GUI-less plugins are effective in nature as they make you focus on your ears rather than your eyes, I find the visual layout of a plugin to enhance the experience of mixing. And with this one, it's been good experience overall as far as I'm concerned.

An even more versatile FET compressor in your arsenal

Just like on the 1176, the 1178 features an 'all buttons in' mode that allows you to set the compression ratio to its highest point (close to a limiter) and add the characteristic saturation that comes with it. Talking about saturation, the guys at Pulsar had the great idea of adding an extra saturation stage with 4 colour modes (Tape, Triode, Warm and Clip) giving you the possibility to go to that 76 territory.

When it comes to the other extras, you get comprehensive digital metering that allows you to see how the compressor interacts with the signal you feed it. You also get a full sidechain EQ with internal and external side-chaining options, Mid-Side processing, a smart and resizable interface (with help balloons that you can activate and deactivate), presets from world class sound engineers, look-ahead and look-behind options.

Yeah, yeah, yeah but how'd it get burned? I mean, how does it sound?

The attack time ranges from about 800 microseconds to 20 microseconds and the release time from 1.1 seconds to 50 milliseconds, just like the 1176, pretty fast! Pulsar Audio have chosen to keep the design of the original release, reversing in the settings where turning the knobs to the left means slow and to the right, fast.

The 1178 is known for working in stereo and being more transparent or clear-sounding than an 1176. Let's see what it sounds like in use :

The first riff I wrote for the demo was on the acoustic guitar. The heavily strummed pattern that I played could really use some dynamic control and taming of the transients. The fast response of the 1178 worked really well on my acoustic guitar, without chocking the signal or making it sound like a different instrument. Using the 1178 on an acoustic guitar buss, even with a fairly high amount of compression, had less saturation that you could expect from the 1176. I've noticed that engaging the 'warm' button and adding drive to the signal, I could achieve the same type of tone as the 1176.

On an electric guitar buss, the 78 warms up the incoming signal, controlling the peaks as needed without altering the tone too much. Setting the saturation parameter to 'Tape' results in a pleasing high-end roll-off. In the demo, I actually boosted the sidechain around 2k on the rhythm guitars, to control that area even more, making room for the lead guitar.

An open or mid-attack with faster release on the bass can allow for the transients to peak through and make the notes more consistent in the mix. In the demo, I actually created a parallel buss in which I set the 1178 to 'all buttons in' mode, resulting in near-limiting compression and heavy saturation. On top of that, the Triode saturation mode nicely enhanced the transients of the bass. I really like that application for the 1178, I could see myself using it quite a bit on parallel busses.

On the kick drum, the 1178 easily increases the transients as needed. When you open the attack (or slow down the attack time) and set a fast release on an 1176, kicks and snares tend to bring back some of the noise floor or rumble. It actually usually sounds pretty cool. You can also achieve a similar type of effect with the 1178, though again, I've felt like it was less agressive than some of the 76s emulations I have. But the very handy saturation module still gives you the possibility to add that extra oomph to the sound if needed.

On a room mic, the all-buttons-in mode, fast attack / fast release sounds similar to the 76. Gritty and characterful as ever.

While I tend to resort to compressors that have a slower behaviour on the mix buss (like the great Mu, also by Pulsar Audio) I must admit that I was nicely surprised with this one. Working in mid-side and the 4-band sidechain EQ help carve the tone that you need for your mixbus.

Another great surprise is the 78's sound on a lead vocal. Slowing down the release time brings a natural feel to lead vocals. In the demo, the preset I've used is specifically designed for that purpose and sounds great right off the bat.

While its characteristics are close to its older brother the 1176, Pulsar Audio's 1178's versatility makes it a pleasure to work with. Its overall cleaner sound doesn't interefere with the signals you throw at it and doesn't make you want to reach for another compressor. Quite the opposite, I've found that the efficiency of the 78 on busses makes it an interesting addition to my arsenal.

Not only that, but the care that Pulsar Audio put into their interfaces already makes me want to see what these guys have got in store next. All in all, the added saturation module, the comprehensive metering section, the well thought-out presets, the mid/side and sidechaining options, the look-ahead and look-behind features... Could actually make this the most versatile FET compressor plugin on the market. Well done Pulsar Audio! 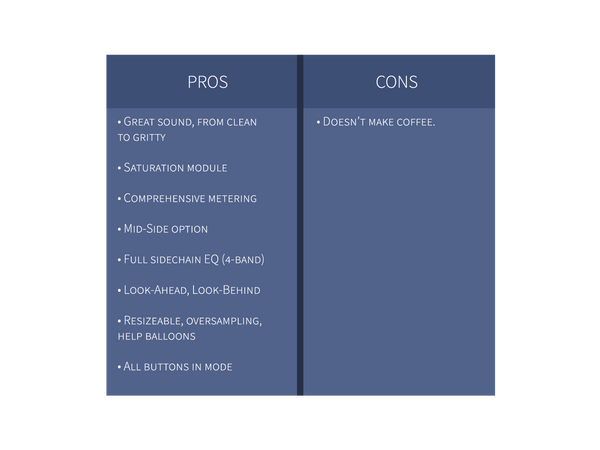 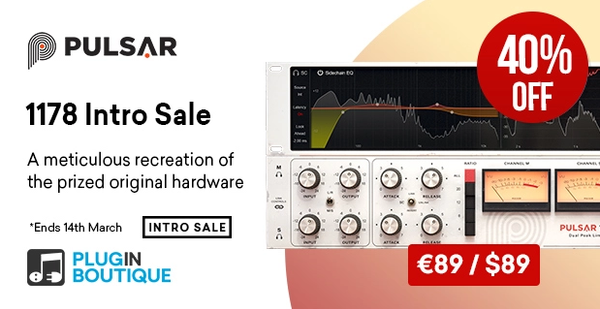